Remington Arms Company, LLC was an American manufacturer of firearms and ammunition, now defunct.[1] Founded in 1816 by Eliphalet Remington (as E. Remington and Sons) in Ilion, New York, it was one of the oldest gun makers in the US and claimed to be the oldest factory in the US that still made its original product.[3] The company was the largest rifle manufacturer in North America according to 2015 ATF statistics.[4][5] The company developed or adopted more cartridges than any other gun maker or ammunition manufacturer in the world.

Until 2015, Remington Arms was part of the Freedom Group,[6] which was owned by Cerberus Capital Management. In 2014, a new plant was built in Huntsville, Alabama to produce AR-15 style semi-automatic rifles and Remington 1911 R1 pistols.[7][8] In 2015, the Freedom Group was renamed as Remington Outdoor Company.

Remington filed for Chapter 11 bankruptcy protection in March 2018, having accumulated over $950 million in debt. Remington exited bankruptcy in May 2018, less than two months after filing for protection under Chapter 11 laws, and its quick exit from bankruptcy was due to a pre-approved restructuring plan that was supported by 97% of its creditors.

On July 28, 2020, Remington filed again for Chapter 11 bankruptcy protection,[9] and its assets were divided up and sold to various buyers.[2] The Remington brand name was bought by Vista Outdoor, which uses it to market several types of ammunition.[10][11]

The Remington company was founded in 1816. Eliphalet Remington II (1793–1861) believed he could build a better gun than he could buy. Remington began designing and building a flintlock rifle for himself.[12] At age 23 (in late 1816), he entered a shooting match; though he finished second, his well-made gun impressed other contestants. Before Remington left the field that day, he had received so many orders from other competitors that he had officially entered the gunsmithing business. By 1828, he moved his operation to nearby Ilion. This site is still used by the modern Remington firearms plant.

On March 7, 1888, ownership of E. Remington & Sons was sold by the Remington family to new owners, Marcellus Hartley and Partners. This consisted of Hartley and Graham of New York, New York, a major sporting goods chain who also owned the Union Metallic Cartridge Company in Bridgeport and the Winchester Repeating Arms Company of New Haven, both in Connecticut. At this time the name was formally changed to the Remington Arms Company.[13] 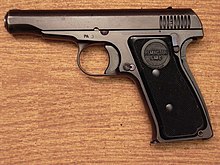 The M24 SWS military sniper rifle, based on the Remington 700.

In 1912, Remington and Union Metallic Cartridge Company were combined into a single entity, called Remington UMC. In the early 21st century, Remington still produces U.M.C. brand ammunition. In 1915, the plant at Ilion was expanded, and with this expansion became basically the same plant as today.

When the US entered the war, Remington became deeply involved in the war effort.[14] Remington developed and produced the US M1917 Enfield rifle, a simplified version of the British Pattern 1914, and also developed the Pedersen device. Between 1918 and 1919, Remington produced roughly 21,000 M1911 for the war effort.

Remington was left with huge stocks of guns and ammunition, and no prospects for payment. The US government purchased the firearms.[15]

During the Great Depression, Remington was purchased by DuPont, which had made its name with improvements to gunpowder. A year later, Remington purchased the Peters Cartridge Company; today, many of the Remington headstamps still have “R-P” on them for Remington-Peters.[16]

In 1940, the US Army became worried about its ammunition capacity and asked Remington to collaborate on a plan for national expansion. With the aid of DuPont, Remington built the Lake City Army Ammunition Plant (originally named Lake City Arsenal) and Denver Ordnance ammunition plants, and three more plants later on, including the Lowell Ordnance Plant. Though the plants belonged to the US government, Remington was asked to oversee their operation. Among the weapons Remington manufactured for the government during World War II was the famous M1903A3 Springfield bolt-action rifle.

There are no reviews yet.